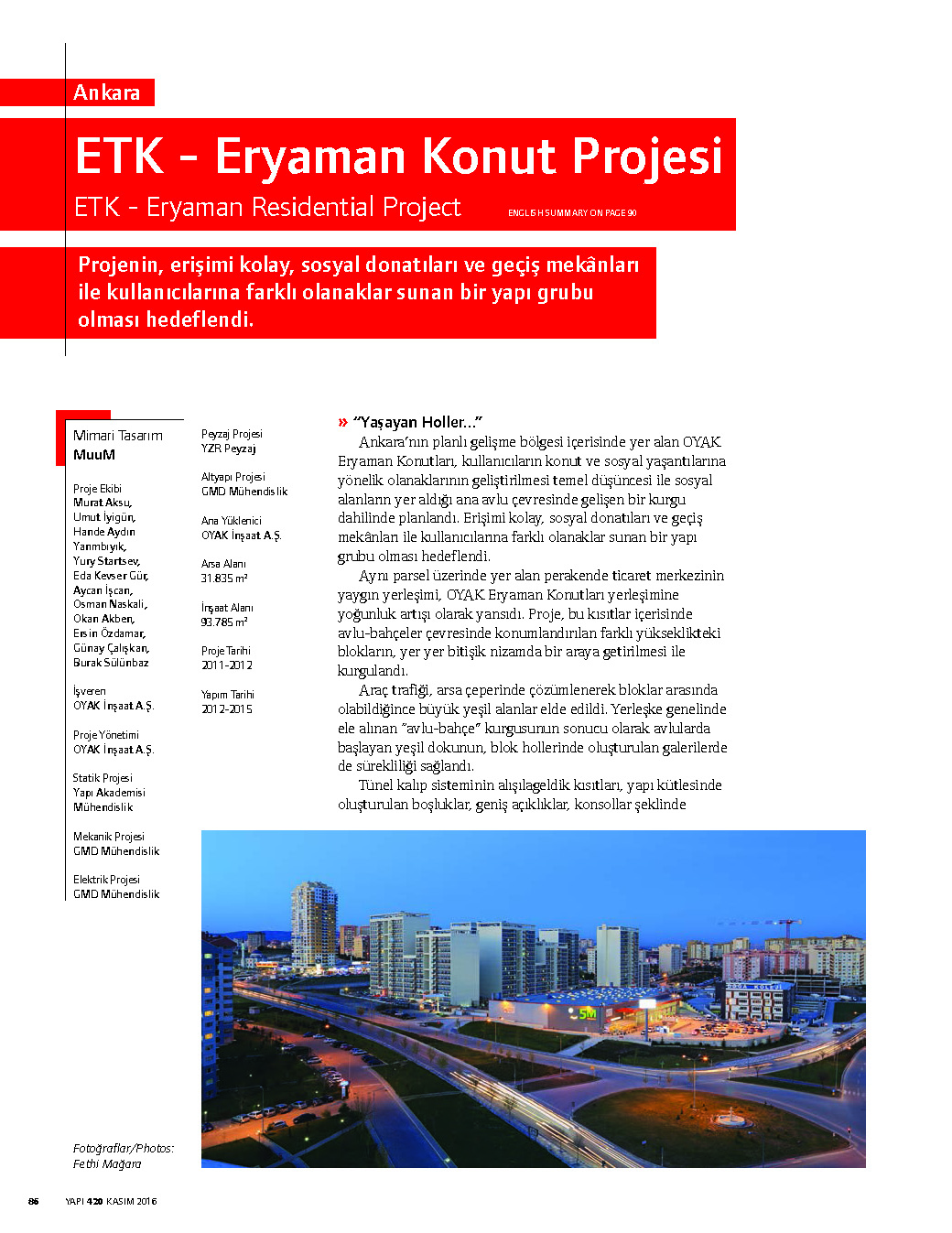 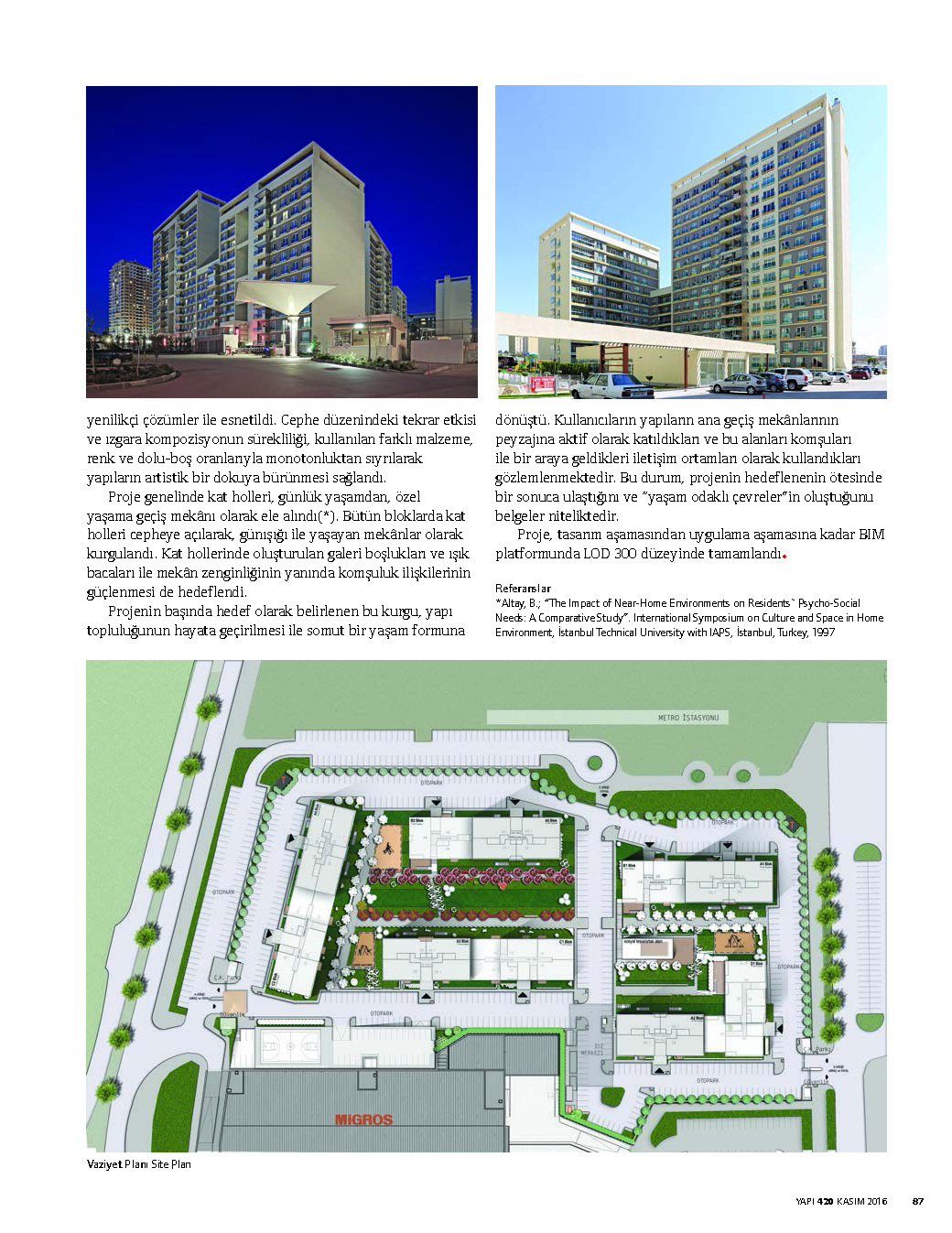 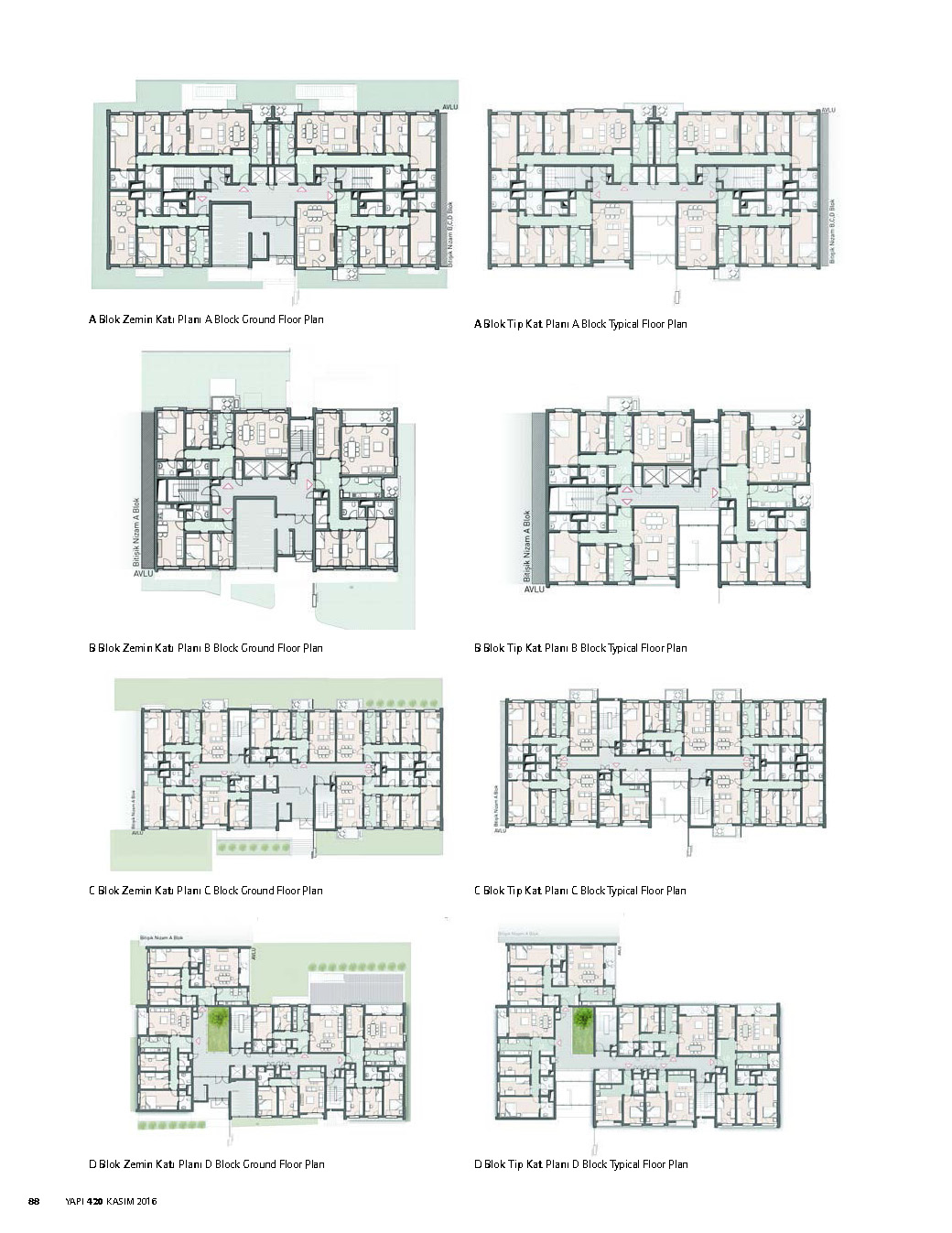 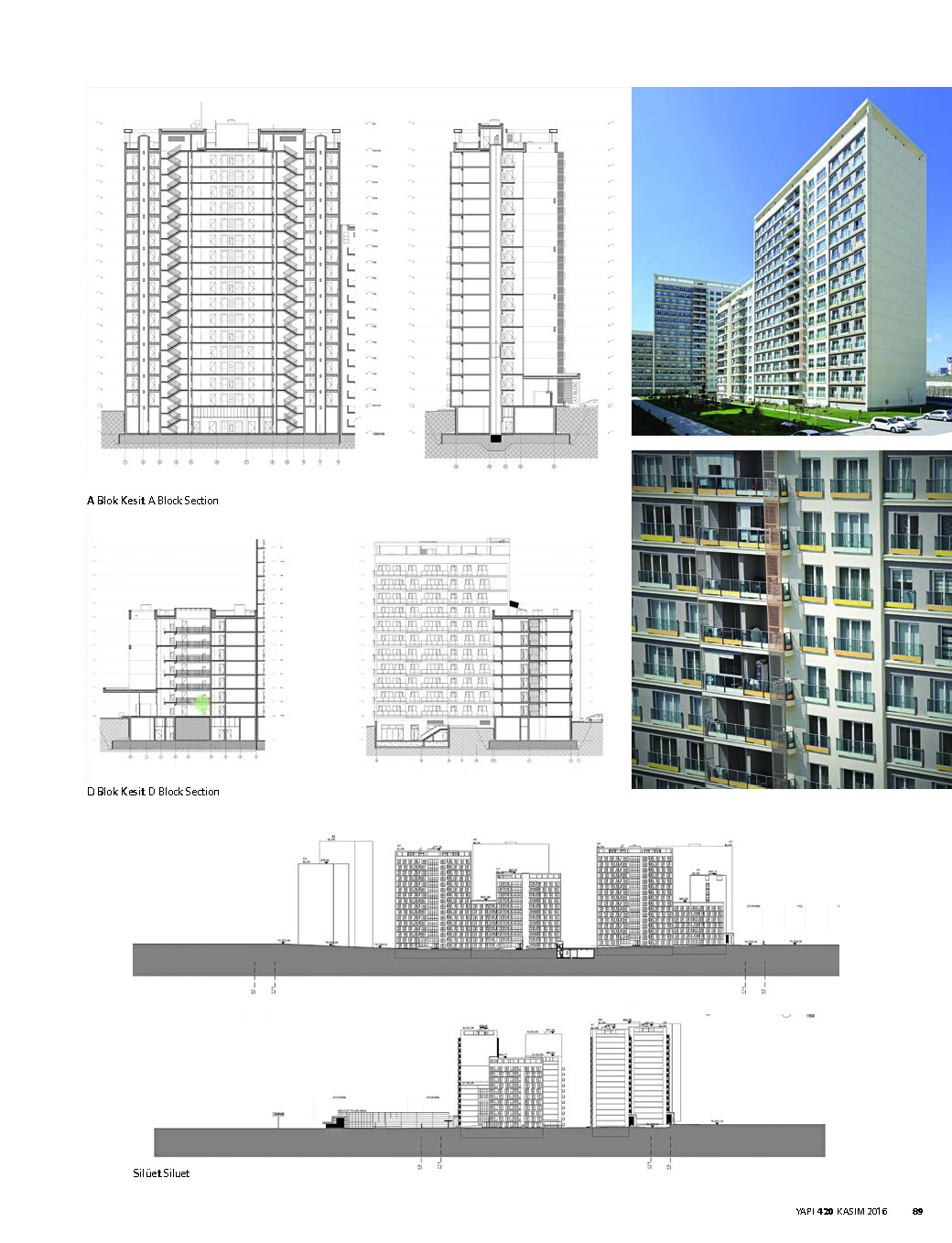 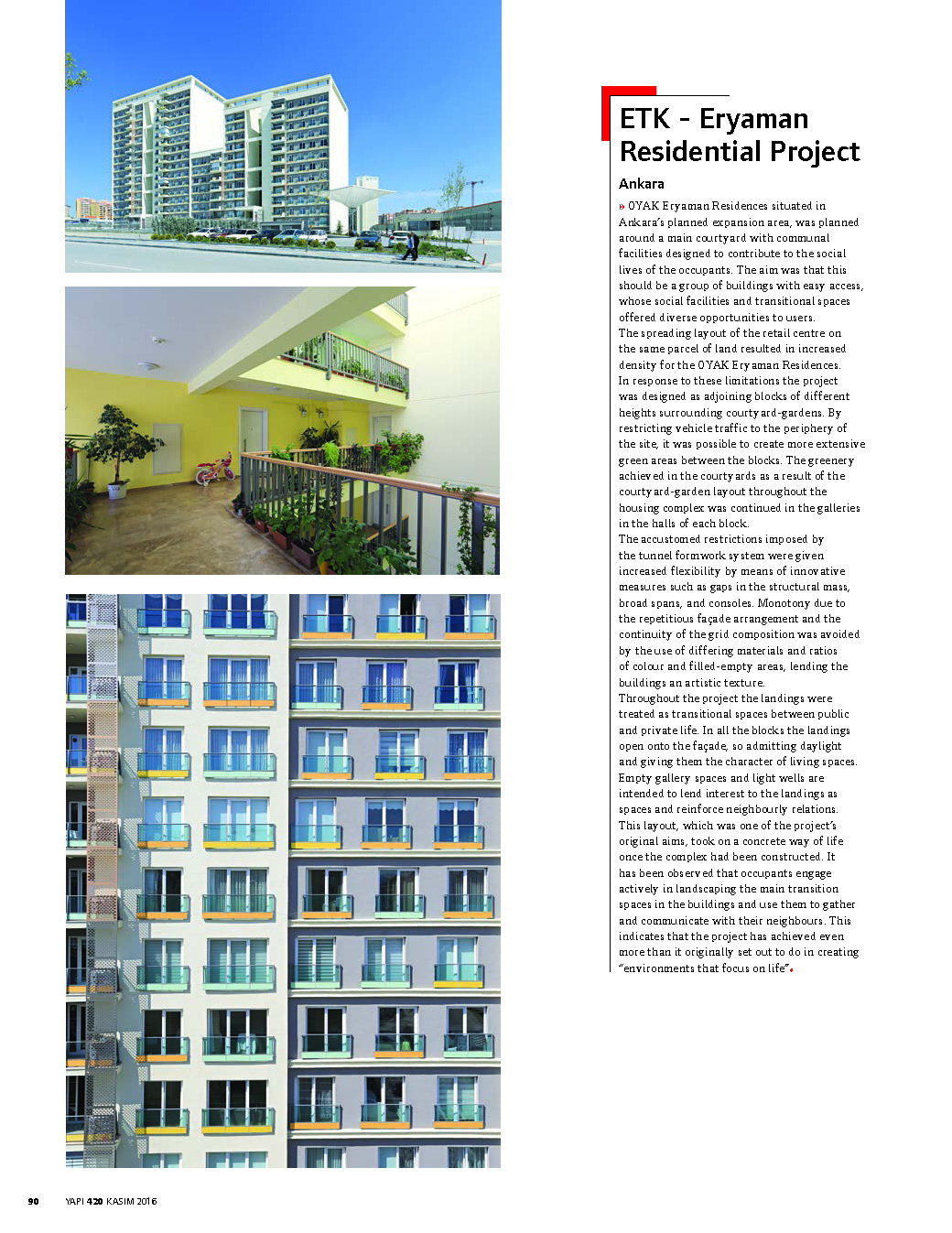 OYAK Eryaman Residences situated in Ankara’s planned expansion area, was planned around a main courtyard with communal facilities designed to contribute to the social lives of the occupants. The aim was that this should be a group of buildings with easy access, whose social facilities and transitional spaces offered diverse opportunities to users.
The spreading layout of the retail centre on the same parcel of land resulted in increased density for the OYAK Eryaman Residences. In response to these limitations the project was designed as adjoining blocks of different heights surrounding courtyard-gardens. By restricting vehicle traffic to the periphery of the site, it was possible to create more extensive green areas between the blocks. The greenery achieved in the courtyards as a result of the courtyard-garden layout throughout the housing complex was continued in the galleries in the halls of each block.
The accustomed restrictions imposed by the tunnel formwork system were given increased flexibility by means of innovative measures such as gaps in the structural mass, broad spans, and consoles. Monotony due to the repetitious façade arrangement and the continuity of the grid composition was avoided by the use of differing materials and ratios of colour and filled-empty areas, lending the buildings an artistic texture. Throughout the project the landings were treated as transitional spaces between public and private life. In all the blocks the landings open onto the façade, so admitting daylight and giving them the character of living spaces. Empty gallery spaces and light wells are intended to lend interest to the landings as spaces and reinforce neighbourly relations. This layout, which was one of the project’s original aims, took on a concrete way of life once the complex had been constructed. It has been observed that occupants engage actively in landscaping the main transition spaces in the buildings and use them to gather and communicate with their neighbours. This indicates that the project has achieved even more than it originally set out to do in creating “environments that focus on life”.